In part, the drive from Topeka KS to Denver was as I remembered it from 50 years ago. My guess is the scenery, meaning corn and cows, and corn and cows is petty much exactly as it was and any differences are just a function of my revisionist memory. I did remember more corn and wheat and not so many cows, and there was plenty of each, mile after mile after mile. Even “the bitch” was bored.

We Saw a number of old homesteads dotting the plains and are always amazed at the courage and determination of the settlers who walked across these plains nearly 200 years ago. Can you imagine their journal? “Day 49, we walked. Day 50, we walked. Today we walked…” endlessly repeating.

I-70 by-passes Denver to the east and turns north towards Fort Collins. The most excitement we during our drive was due to the lack of gas stations. The bitch routed us around Loveland on 287, a dirt road probably due to construction, and there was no gas on that route either. Our gas gauge started flashing with 50 miles to go to Laramie. The Prius was averaging 44 miles per gallon across Colorado, but I knew we were gradually rising as we approached the Rockies, so hoped our mpg’s would stay the same or improve. Unfortunately, the drive bypassing Loveland to just west of, and bypassing, Cheyenne was likewise uphill. Spoiler alert, we made it, with a gallon to spare and filled up east of Laramie.

Fran asked people in the McDonalds next to the filling station, if there was a good place to eat nearby. One of the employees said if you are tired of McDonalds, KFC is just down the road. Instead, while the car was filling I checked Yelp for a restaurant recommendation between Laramie and Rock Springs. By chance I found a  restaurant in Rawlins that had 60 reviews and a 4 star rating. The Aspen House Restaurant is actually a local country restaurant in a converted Victorian house. Fran drove from Laramie to Rock Springs, and I slept. We entered into a small quaint dining room and looked around for a host. One of the customers saw us and waved us toward the back toward the host station. The hostess welcomed us and showed us to a nice table in a small semi-private room, just large enough for that one table. One door lead back to the entryway and the other to the larger dining room with the friendly, helpful customer. 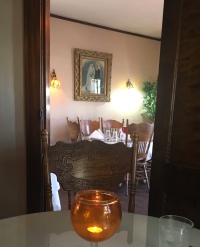 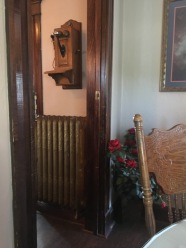 We took an hour off from driving and had a very nice meal. I cannot imaging passing this way again, but if we did….

Tomorrow we are hoping to make it back home. It is an easier ride that we had today but if  I we tire later in the day we will stop one more time.