You should have seen Rosie in her little doggie life vest. The only way the tour line would let her go is if she wore it. We were on an architectural tour of Chicago by river. It was well worth the money, even if they don’t have senior discounts.

I was about to take a picture of her, she was so cute, and she snarled, “You take that picture and you will have one big problem on your hands.”

”We are about one quarter of the way through our journey now, right? How many times have I peed in the car, or better yet the hotel room? You know that deposit you have to give for me to stay there? Have you smelled the inside of a car after 3 weeks of dog pee accumulating in the back seat?”

I pointed the camera away. Have you ever been in a vindictive dog fight? Take my advice, avoid them.

We walked down by Riverwalk, about a block from our hotel, planning to buy tickets for a later tour. It turned out a tour was leaving in 20 min so we decided to take ours now. We chose the architectural tour as Chicago has a varied collection of old and new architecture. It’s also the home of Frank Lloyd Wright, however we found none of his buildings reside downtown along the river, although some of his students designed various buildings seen on the tour.

The tour is about 90 minutes long and goes on the Main, North and South branches of the Chicago River. We had an excellent volunteer docent, a teacher by profession who spends his summer leading these tours and describing the buildings and their history to tourists.

they occupied, or reflect their environment. Several were clad in blue or blue-green glass to represent the Chicago River. Some were curved to flow alongside the bank of the river.
One was located on a narrow strip of land forcing the base to taper down smaller than the width of the building. The glass on the angled windows of the base reflected an image of the tour boats as they passed. (Center picture)

After looking left and right a few times and craning her neck to look up, Rosie muttered, “Modern, Post-Modern, Neo-classical and what they call Art Deco. If they want Art Deco they should visit Miami, or better yet, my home, Havana. I think I will take a nap.”

The rusty Chicago Style bridges we passed under looked old but apparently still functioned. They are known as trunnion bascule bridges. Think of them as two see-saws meeting at the middle of the river. Counterweights are pushed on or off the end of the bridge to raise or lower it. (Right picture shows understructure of one bridge.)

If you look closely at the bottom left corner of the right picture you can see Rose, asleep at the wheel. Just kidding.

After the boat tour we headed towards the Art Institute of Chicago. We had decided to

have a light lunch before visiting the Art Institute so stopped by Millennium Park for a traditional Chicago lunch – a real Chicago Sausage sandwich with jalapeños. When I picked it up the basket was soaked in oil. What could be better, plus it stays with you all day and well into the night!

We were amazed at the paintings in the Art Institute. Works you only read about or see in books, Renoir’s, Chagall’s, Grant Woods’ American Gothic. I never knew the woman was Woods’ sister and the man was their dentist. (I might shop around.) Learn something new every day. Probably Rosie could have told me that.

deep dish Chicago pizza with butter crust. Being an easterner I have trouble with this as a pizza, but as a great tasting Italian dish, no problem at all. I just realized I called the hotel “home.” After another week or two of travel I will think of the Prius as home. We stayed at the Hotel Chicago, a Marriott Autograph Hotel. I highly recommend this hotel to anyone staying in Chicago. The staff was beyond helpful and friendly. We had a night stand light that didn’t work, called the front desk and an engineer was there within 5 minutes. He checked the circuit and replaced the bulb and didn’t even hint what idiots we were for not suspecting just a blown bulb. We stayed on our Marriott points and were treated like royalty. Highly recommended.

We walked the 17 blocks from Lou’s to the CIBC theater to attend our first performance of “Hamilton.” Everyone else in our family (Neil & Maureen, Daniel & Frances) have seen it at least once, this was our first time. We decided to attend in Chicago as the Stubhub tickets were half the cost of Broadway’s. We ended up 6th row, center. Not bad at all. Fran won’t  tell me how much they cost. It was an excellent show. The acting, singing, dancing and set were all amazing. 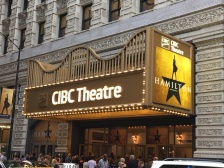 We walked the 10 blocks back to the hotel and decided our 1½ day R&R in Chicago was well worth it. Tomorrow morning we leave for Cleveland and an Indians vs Yankees game tomorrow evening. It’s only a 6 hour drive so we have our ½ day of rest before we leave.