Up early as usual, checked the news, as usual, coffee as usual, thank you David for being such a good friend and host this weekend. 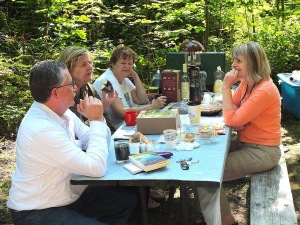 camping at Branbury State Park on Lake Dunmore. Check out “Road Trip!” for more Lake Dunmore experiences. Even owning our own camp, located about a mile south of Branbury on the same side of the lake, we used to go to there when we knew friends, like Ginny, were going to be there. Ginny gave me this photo proving I was there. It has

scrawny me, Ginny in the middle and Lianne (z”l) on the right.

Branbury, as we call it, was a farm at the turn of the century (1900, that is) then became a guest house before becoming a boy’s camp and ultimately a Vermont State Park in 1945. Interestingly our “camp” (i.e. John’s cottage) was built around the same time. David and I were wondering if this development of Lake Dunmore was an effect of soldiers returning from WWII and wanting a refuge from the hectic life in the village (Middlebury.)

I camped at Branbury some time ago. To be honest a long time ago, like 60 or so years ago. Relatives of our next-door neighbors in Middlebury used to camp throughout Vermont and one year chose Branbury. We joined them out of friendship that time, and for other camping trips over the years. My brother and I are still in touch with them, which is a very good thing.

Ginny and her friend Cheryl worked together as teachers for several years. They have been camping two weekends a year (May/June and September/October) for several more years. The lean-to campsite comfortably fits three or four, so the four or five people was a bit of a squeeze, but they are all friends, close friends. David and I brought a dozen

donuts from Hannafords, and unfortunately, they were in the campsite, so we had to share. We had a great morning sharing and remembrancing and of course, laughing. The weather was perfect and was just beginning to warm when it was time for David and me to leave for the airport.

I planned to survey waiting passengers to find another subject for a new short story, unfortunately, the only interesting person in the gate area was a young-ish woman, with a cell phone being charged on the counter, and I just used that character on the flight from Sacramento to Burlington.  There is a field hockey team from UC Davis flying back to Sacramento. I flew out with them, but they are on a different flight home. They lost both games they came cross country to play. Too bad. (Go Panthers!)

Maybe I will have more luck in Dulles.

Well, no luck in Dulles. The only person of any interest at Gate 8 in Dulles could have been the woman from The Cell Phone but not dressed as well. Maybe they receive the contract from the conglomerate and was returning home.

My flight was on time which surprised me with Florence still hanging around. As I had to walk the length of concourse B at Dulles I had no time for dinner so decided some Salt and Pepper Chips onboard would be adequate. Coupled with a split of Malbec/Cabernet, I would survive. When a flight attendant passed by collecting trash she said the chips were highway robbery. $3.99 for a small bag. She asked if I would like another and of course I said yes. She came back (much to my surprise) with another bag of chips and one of their cheese and cracker snack boxes, asking which I would like. Remember the unattendant from the first flight? She should take lessons.

When I suggested both, she said “don’t treat her like your momma, expecting

everything.” She suggested the cheese and crackers to pair with my wine, which she noted was almost gone. I agreed and thanked her profusely. Moments later she returned with another glass of wine letting me know we were almost even. I replied, “Thank you Momma.” I did ask the guy next to me if the flight attendant might consider driving me home now, but no. There were hours left to fly, with Fran and Rosie waiting for my return. At least Fran. Rosie was probably asleep.