Sadly, I dropped Neil and Maureen off for their early morning, albeit delayed, flight from Burlington to Pittsburgh this morning. They are competing in an international pinball tournament starting tomorrow. My plan was to return to camp for an hour then meet David and Ginny at Texas Falls. Yes, I know it is really Virginia now. And her last name changed. Tough. Deal with it. Instead, I decided to go straight to Texas Falls and just arrive a bit early. On the way I passed the Middlebury College Snow Bowl and 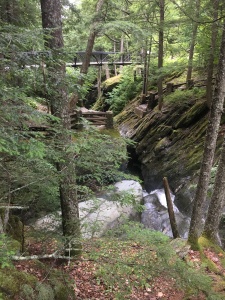 stopped to snap a summertime picture of the Allen trail for a previous post. I arrived at the falls a early (as expected) and was somewhat surprised to see how updated the area was. There were guardrails and a new ADA complaint bridge, nothing like the old days. Still it is a beautiful place, well worth a walkabout and a few pictures. (“Hello, I am from the government and we are here to help you.”) We used to spend a lot of time there, swimming in the glacier formed pools. No swimming now. Almost no anything thing now. Oh well, things change. 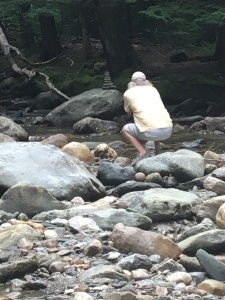 David and Ginny met me there and we spent half an hour standing on a rock bar in the middle of the stream chatting, catching up on the last 50 years (no mean feat) and laughing. David is a gallery quality nature photographer and likes to take 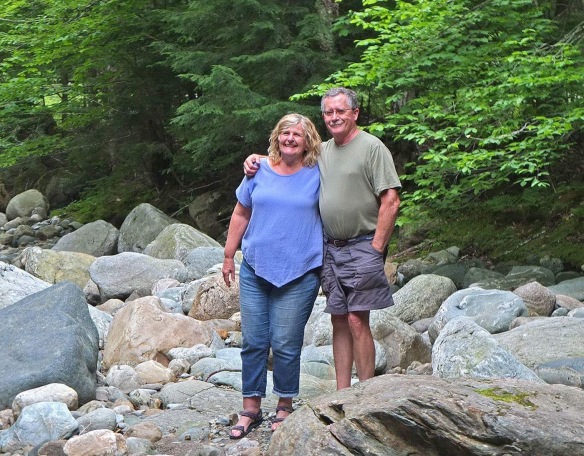 Ginny, I told you I should have sucked my stomach, in.

pictures of the same areas at different times of day and season. There was a long debate over which of us, (along with a few others) was the instigators of all the trouble we got into as kids, whether we were caught or not. I remembered it differently than David. To the best of my memory, I was the good one. Let’s just say it is a good thing my adult children were not there to see what a hypocrite I am. Of course I consider my refusal to let them do things as sage advice from an experienced elder. In the end, I conceded it may have been me after all. (Maybe.)

We adjourned to Middlebury for a walkabout pointing out all the new stores and shops and commenting on the only one still remaining, The Vermont Bookstore. One of my early childhood friends was the manager of the bookstore, but when we went to say hello a store employee told us he retired a few weeks ago. We reminisced about who owned which store, 50 years ago (Ginny remembering better than David or me.) That would be expected, of course, she is younger. 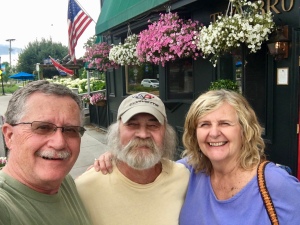 Lunch and adult beverages at Two Brothers Tavern near the end of town. We were probably a little loud and rowdy for the other patrons. Too bad. It was a most excellent morning, reunion of miscreants and most importantly, friends. Sometimes we forget the important things in life and friends are required to remind us where we started and how we developed into what and who we are today. Family and friends, that is what life is all about, the rest is just details, go and learn.