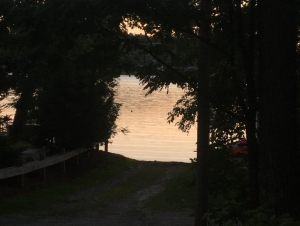 I woke around my usual time and peeked out the screened porch of the overflow cottage towards the lake. This porch faces south, rather than west like the camp’s porch. The sun was just rising and all was calm.

My brother John and I started the day with our early morning coffee ritual on the camp porch (his). We pencilled the weeks activities onto my iPad calendar for Sue and Fran’s later review. We knew we had to make a trip to Burlington sometime during the day, but had the morning free. After coffee we drove on back

roads, mostly dirt, to Woods Market Garden. Have you ever driven on dirt roads? It is a bumpy, exciting, dirty and such a very Vermont experience.

“Woods” is an enhanced farm store south of Brandon on Rt 7 that sells amazing berry pies as well as a huge variety of vegetables and fruits. The pies are made with any berry or fruit that is in season, currently they are making peach, blueberry, raspberry, rhubarb and mixed berry. We bought at least one of each, except rhubarb. They had fresh local sweet corn, (we bought a dozen ears,) tomatoes, (picked that morning,) and some gelato for my niece, John’s daughter, Kris. 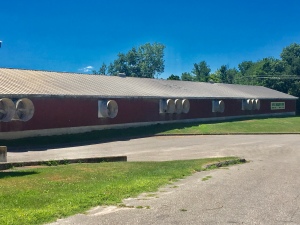 After leaving Woods we went to Devoid’s Maple Meadows Farm, THE place to buy eggs in the greater Leicester – Salisbury area. Here is a little knows fact, known only by everyone in my Vermont family, or anyone who has visited me at the lake: I was part of the construction crew who built one of the chicken barns the summer of 1970.

We then spent a perfect afternoon sitting on the porch, complaining about how hot it was, reminiscing about the past and reviewing

all the changes to the lake. More people are living on Dunmore year round and more and more people are building bigger and bigger homes. Oh well, time marches on and time changes all. Entropy.

Did I mention beer? I should have.